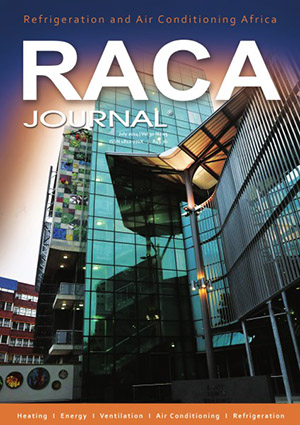 Congratulations to RACA on an excellent publication. Its content and quality compare favourably with the very best. Rory, Dale and their team can be justly proud of their achievement.

My 50 years in the Industry so far has been very much a game of two halves – selling and consulting. As we all know that selling is far more interesting than consulting, I have chosen this as my subject of my talk today.

I’m going to talk specifically about the refrigeration equipment wholesaler, that friendly sales counter where one gets all the bits and pieces to make the job possible. In my opinion, these companies represent the backbone of the Industry.

When the Journal was established in 1984, I was working for small wholesaler in Durban. At that point I had already been working for them for 14 years and was heading up the operation.

So let’s go back in time a bit, back to the mid 70’s. At this time there were four recognized refrigeration equipment wholesalers. We all sold pretty much the same type of equipment albeit different brands and of course, we were fiercely competitive. Nevertheless, we remained good friends and colleagues, helping each other where we could with stock, technical knowhow, industry knowledge and the like.

We enjoyed a common customer base. Everyone knew just about everyone. We were in fact, a small close-knit family.

Who there at the time, could forget the Friday night get-togethers at the various sales counters, or the business lunches that continued long into the night?

Every centre had its favourite Industry watering holes. Durban had the notorious Smugglers Inn, The 32nd Floor of the Maharani Hotel and the grand-titled British Middle East Sporting and Dining Club. Cape Town The Blue Peter, Wooden Bridge Restaurant and the well-known Vasco Da Gama pub in town. Johannesburg had the Ophirton and Booysens Hotel, the La Perinah Restaurant and the and Carlton Hotels Three Ships Bar.

Then there were the Christmas parties and the visits to the infamous strip-tease joints. All of this was the stuff of legends.

But all was about to change.

Looming over the Industry was a large Engineering Group on the acquisition trail.

Through their venture into copper tubing, they gained exposure to the HVAC Industry and no-doubt liked what they saw. After first purchasing a large local manufacturer of AC equipment, they went about systematically buying up the available refrigeration equipment wholesalers, eventually owning no less than 3 of the original 4.

Now this large Engineering Group did not have a very good reputation, but what it did have, was an excellent training facility down on the Vaal River.

They promptly enrolled all their newly acquired refrigeration people, where we were introduced to John Cleese and Ronnie Corbett, who, through their movies taught us all how to sell widgets. “Finance for Non-Financial Managers” became the course of choice, where we learnt all about profit and loss, return on investment, stock turns and everything else to do with finance.

We were then all analyzed by a well know industrial psychologist, who later admitted that the candidates from the refrigeration industry were by far the most complex he had ever had the misfortune to assess and report on.

Armed with these new found skills, we were encouraged to carry on training at arm’s length, competing against each other and fighting for every order.

However, corporate interference was very soon beginning to tell.

Increased sales pressure, much reduced stock levels, strict controls and of course, no more entertaining of customers, all began to take its toll, leading to demotivated and demoralized staff. This in turn led to a serious decline in service levels. The only remaining independent wholesaler was smiling all the way to the bank and back.

The three Group wholesaler’s plodded on rewardless when, after several frustrating years, the holding company was purchased by another even larger Engineering conglomerate. The new Group was involved with ship building, rolling stock for the railways, winding gear for mines, all of these sectors of which were going south. They now required to diversify urgently.

From the outset, the new owners resented the HVAC acquisitions. They loathed our independence, special skills and cavalier attitude. They immediately set about getting rid of the inherited refrigeration Management Staff, replacing them with their own, straight out of the Group nursery school. Their aim was to dictate and control the HVAC market.

In actual fact, it heralded the demise of the Group’s refrigeration wholesale enterprises.

Lack of industry knowledge, poor management, misguided decisions, arrogance, all combined to ensure the downfall of what were once well run and profitable privately owned companies.

However, from this demise and realizing the opportunity, sprang up new wholesale ventures. Recently dismissed and displaced refrigeration people joined these new companies, bring their contracts and expertise to the table.

In desperation, the Group merged its three wholesale companies, trimmed its staff and product range in an attempt to compete. A case of too little, too late.

This of course was snapped up immediately and exists to this day, all back on track and doing well from all accounts.

On the other hand, what remains of the Group is now suspended on the JSE, its share price around R0.70.

The wholesalers are once again independent and dependable. Hopefully they will remain so, thus affording our Industry the service it deserves.

The past 30 years have seen tumultuous times in our Industry and in our country.

The RACA Journal has continued to serve through thick and thin.

I, along with all in the Industry, wish it a further 30 years of successful publication.