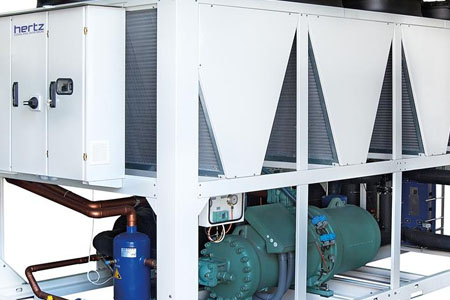 Chilled water generators, or chillers, to give them their more common description, have been used for comfort cooling since around 1921, when Dr. Wills Carrier patented the first centrifugal water chiller.

In South Africa, our first experience with chillers seems to have occurred in the nineteen thirties, when two new Metro (bioscope) cinemas, Durban and Johannesburg, were each provided with identical centrifugal machines.

While the actual bioscope airconditioning design concept was rudimentary to say the least (chilled water spray-chamber ahead of the single supply air fan), the chillers themselves were pure engineering genius for their time.

Over the ensuing years, the principal means of chilling water in a closed loop remains much the same, although chillers themselves have evolved beyond all recognition.

Today a bewildering range of chiller products have come onto the market, to the extent that specifiers and end-users must now rely more and more on product reputation, project feedback and the sound advice of their favourite chiller salesperson.

To start off with, I think it’s fair to say that, no one sets out to produce an inferior or truly bad chiller. The capital outlay required to set up a chiller manufacturing plant, with all its many integral facets, would simply not warrant a half-hearted approach.

The chillers available to our market today are all solid, robust and generally well supported. However, given the wide range of manufacturers and suppliers involved, the question is, can it continue to be sustainable? (Already we are seeing company mergers that would indicate that it’s not.) With new contenders entering the market almost every year, its little wonder that our Industry is somewhat overawed by the vast range on offer from every which way.

How then does a new-comer to our market even begin to compete against the old guard, the well established and historically advantaged chiller suppliers? With great difficulty I can assure you.

After all, a chiller is a chiller ou pal. It’s sole purpose is to generate chilled water (or hot water), finish and klaar (to paraphrase Selebi).

Price of course, is clearly an important factor to be considered. There will always be a market for the lowest priced commodity. However, we all know that the lowest price usually comes with its inevitable disadvantages and shortfalls. Generally speaking, circumstances will dictate the final decision and “cheapest” usually implies a short-term gain only.

Aware of the enormous competition, the manufacturers have not sat back on their laurels. The chillers available today are a far cry from those solid old workhorses of the sixties and seventies.

The energy crisis, global warming and the like, have played a major role in the advancement of chiller design to the extent that all now offer a wide range of options, albeit with the inevitable price tag. Nevertheless, the options on offer allow the consultant, contractor or end-user to select exactly the type of chiller best suited to his or her purpose of course with the help of the ever eager salesperson.

Take compressor design alone. The engineering in this regard is right up there with the Aerospace Industry, way beyond the simple yet rugged offerings of yesteryear. Let’s look at some variations on offer….

It would now appear that the long-serving piston-type semi-hermetic reciprocating compressor is a thing of the past, as far as chillers are concerned.

At the lower end of the nett cooling capacity displacement range, these die-hards have been replaced by the latest versions of hermetic rotary and scroll compressors. This range offers low weight, low noise and low vibration characteristics. Both types are available with variable speed (inverter) option for optimum efficiency. Generally when configured in a multiple circuit arrangement, cooling capacities of up to 800kWR (possibly more) are achieved, with heat reclaim capability also available. These ideally suit the situation where reduced installation costs are necessary due to budgetary restraints, etc.

Remember however, the failure of any one of the (multiple) compressors, will contaminate the entire circuit, requiring additional care when cleaning and flushing the system.Moving up the price scale, you encounter the screw compressor models. Not necessarily new technology, but advancements in this regard have been significant. Let’s have a look at what’s available right now to the specifier.

Enough said about the trusty screw. Let’s now consider what I believe to be the optimum in compressor engineering, the long-serving single and two-stage centrifugal. As previously stated, these have been around since the 1930’s, in fact ever since Pontius was a pilot. Their reliability and longevity is the making of legends. Drifting out of favour with the demise of the ozone depleting refrigerants (R11/R12/R113, etc.), the centrifugal has nevertheless survived all odds and remains in my opinion, the supreme king of compressors. With nominal cooling capacities of up to 10,000kWR, utalizing R134A as the cooling medium, the use of the centrifugal compressor allows two stage liquid chillers to achieve a COP of up to 6.5 (AHRI conditions) and an integrated part load value (IPLV) of 10.5, with a variable frequency drive control facility.

Staying with the centrifugal theme, we shouldn’t overlook what has to be the most significant compressor development of modern times, the two-stage oil free variable speed magnetic levitation machine.

The four models available offer a capacity range of between 200kWr and 600kWr, utilizing R134A, R513A and R1234EZ as the cooling mediums.

Developed in the 1990’s (a remarkable story in itself), this extraordinary compressor is considered by it’s Developer to be the most efficient, light weight, compact, environmentally friendly, quiet and vibration free compressor available worldwide. It is now widely used by many of the leading Original Equipment Manufacturers, albeit only for their top of the range offerings.

While the compressor is the heart and soul of the chiller, the many and various innovations by the chiller manufacturers themselves to enhance efficiency, servicing, noise levels, reliability, etc. and to improve costs, has been most impressive over the years.

Now the burning question. Which chiller do I choose?

Of course the specific application will clearly dictate, water-cooled or air-cooled. Furthermore, the available budget will have a major influence on the final outcome, whatever the application.

Energy consumption and environmental considerations are more and more in the spotlight, with the end-user having a greater input in this regard.

Engineering support, backup and product reputation plays a major role in the decision making process. The tried and tested route sometimes makes for the most practical solution under the circumstances.

With some 20 major role-players in the local chiller market (possibly more) selecting the make of chiller best suited to your needs is never going to be an easy task.

Needless to say, despite all that your “Super Chiller Salesperson” claims (and promises) and how many free lunches on offer, the final decision lies with you, the specifier. However, whatever make and type of chiller you choose, your client’s best interests must be foremost in your mind at all times.

When closing the deal, be absolutely sure that you have covered all the bases. Ensure that your client is fully aware of all available options, to include the advantages, as well as the disadvantages associated with each option on offer.

Tag this conversation, it could cover your backside further down the line.