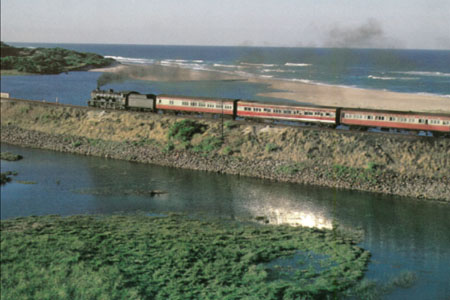 I grew up in a small village on the Natal South Coast, one of the many such villages stretching South along the Eastern seaboard from Durban to Port Shepstone.

These villages lay on the main South Coast railway line, each with it’s own dedicated station, complete with a ticket office, signal room and station master.

In the day, the railway station was the very hub of village life, serving the local passenger fraternity, as well as the goods transportation needs for the area.

Most village railway stations had their own water storage facility, a large galvanised steel tank at high level, of some 100,000 litre capacity. These tanks were usually located to the north end of the platforms, situated such that it could service both North and Southbound steamers.

To do this, the tanks had a large filler piper 200-300mm in diameter protruding from below the tank, designed such that it pivoted from side to side as required, depending on the direction of the train to be watered at the time.

Fixed to the outlet of this filler pipe was a section of canvas “tube” affectionately referred to by the firemen as the “voorhuid”.

With some thirty odd such tanks in place all along the line, the water storage capacity at any given time was between 3 to 4 million litres of water, water drawn from the upper reaches of the many local rivers that flow towards the Indian Ocean.

This would seem like a lot of water storage, but consider this. The steam engines of the 12R and 14R Class that served the South Coast line, each had a water tender capacity of 6,000 imperial gallons (say 23,700 litres). The total monthly water consumption could easily have been in the order of 6 million litres.

It is fair to say therefore, that the SAR&amp;H was, in its day, a large consumer of fresh water. Probably as much as 2 billion litres per annum across their fifteen main rail system networks in operation across the country at the time.

You might ask, what is all this trivia leading up to? Simply this. In days gone by, water was always a readily available resource. Consumption thereof was of little consequence. It was cheap and expendable, much the same as coal.

This can be further confirmed by the number of steam generating power stations that were popping up everywhere an abundance of coal and water existed.

It can be safely assumed that the replacement of the steam locomotives with electric units (which commenced in the 1970’s) was for modernization purposes rather than the protection of valuable resources. In a sense, the water and coal required to drive the steam engine, was simply diverted to the Power Station to generate the new electrical power needs of the SAR&H.

So what then is the modern-day scenario in South Africa with regards to water? It would appear from the outset that very little in fact has changed in the Country’s overall perception of water as a sustainable resource. It continues to be miss-managed and wasted on an ever-increasing scale, to the extent that South Africa is now officially acknowledged worldwide as a water-stressed country.

With this revelation in mind, let’s now relate this to our Industry.

I’m told by a reliable source that an average-size open-circuit cooling tower will evaporate to the atmosphere, 0.43 l/s of water for every 1,000kW of heat rejected, calculated as follows:

To this must be added the bleed-off rate (usually ⅓rd of the evaporation rate) to arrive at the total water consumption, making airconditioning a sizeable user of municipal water.

Take a city like Durban, where its 250 odd large cooling towers located in its CBD, consume around 33 million litres of water monthly (given normal bleed rates and an overall diversity factor of 60%), considerably more than the old South Coast steam line!!

This imposing usage specifically excludes wastage due to overflow, leaks and poor maintenance.

Clearly our Industry is by no means a modest consumer of water.

So what is the way forward?

Firstly let’s accept that South Africa no longer has indefinite water resources. If we can get past this mental barrier, our behaviour towards water will no doubt change for the better.

Every region, every city and every town is currently experiencing a water crisis brought about by erratic weather patterns. You can blame this on climate change or the man in the moon if you like, that’s not the point. The fact remains, we do not have sufficient water to meet our ever increasing demand.

Rapid development since the ninety’s has also played its part, coupled with aging infrastructure, poor maintenance, lack of planning, skills shortages, pollution, everything one can think of has transpired to condemn our water situation to its slow and painful demise.

As an Industry, we now need to play our part. We owe it to our future to address the situation now rather than later, by reducing our dependence on water as a condensing medium.

What options then are out there? Here are a few for consideration.

In closing, let’s go back to the railways.

In the 1950’s., the Railway Engineers faced a serious dilemma in the vast arid regions of South Africa. How to reduce the amount of watering points required over long distances and how to optimise their operating water reserves.

These few brilliant South African Mechanical Engineers came up with a design for an air-cooled “condensing” locomotive, the famous Class 25 Condenser 4-8-4.

This comprised a system of coils through which the engine’s exhaust steam was directed. Large turbine fans drew air through the “condenser” coils, condensing the exhaust steam, the resultant condensate returning to the water tender.

In this manner, the engine was able to utilize its own water eight times over, showing a saving of 90% through an area where water has always been in short supply.

These accomplished machines did duty through the Great Karoo for many years and the sound of these beautiful Class 25’s at full throttle, with the turbine fans at full speed, was a sound to excite any steam enthusiast, indeed a testimony to innovative engineering.

So let’s look seriously at saving water by every means possible, as those Engineers did back in 1954.

Just remember, when the water has gone, it may not necessarily mean the end of life as we know it, but it will be pretty damn close.